Join us to celebrate a classic text in refugee law – completely updated and expanded for our times.

We are pleased to celebrate the launch of the fourth edition of The Refugee in International Law
by Guy S Goodwin-Gill and Jane McAdam (together with Emma Dunlop) in two virtual events.

'The Refugee in International Law: Then and now'

Scroll down for video and podcast recordings

Register now for the next event:

A discussion with Guy S Goodwin-Gill and Emma Dunlop, chaired by Arif Hussein

On 9 November, as the book is published in the United States, Guy S Goodwin-Gill and Emma Dunlop will focus on the practice of refugee law today, in a discussion with Arif Hussein of the Refugee Advice and Casework Service (RACS).

How is refugee status determined around the world amid changing social pressures? What are the trends in protection in different jurisdictions? What legal questions arise when restrictive policies mean that access to asylum is blocked, rights are curtailed, and people cannot access fair status determination procedures?

About the authors and speakers

Professor Guy S Goodwin-Gill is widely recognised as having established the field of international refugee law with the first edition of The Refugee in International Law in 1983. Now at the Kaldor Centre, he is Emeritus Fellow of All Souls College, Oxford. His distinguished career has encompassed not only a pioneering contribution to the academy, but also to practice, through his advocacy in the courts, contributions to parliamentary and international committees, and his engagement with civil society and UNHCR.

Professor Jane McAdam AO is Director of the Kaldor Centre and co-author of the latest two editions of The Refugee in International Law. She is widely recognised for her outstanding scholarship and as a pioneer in the conceptualisation of legal protection for people displaced in the context of climate change and disasters.

Shukufa Tahiri is a member of the Kaldor Centre’s Advisory Committee. She is Executive Director of the Akademos Society, and formerly served at the Refugee Council of Australia and the National Refugee-led Advisory and Advocacy Group.

Arif Hussein is a Senior Solicitor at the Refugee Advice and Casework Service (RACS). He has spent over eight years working with refugees and people seeking asylum both in Australia and in Australia’s Regional Processing Centre on Manus Island, Papua New Guinea. He is the recipient of a 2020 Churchill Fellowship. 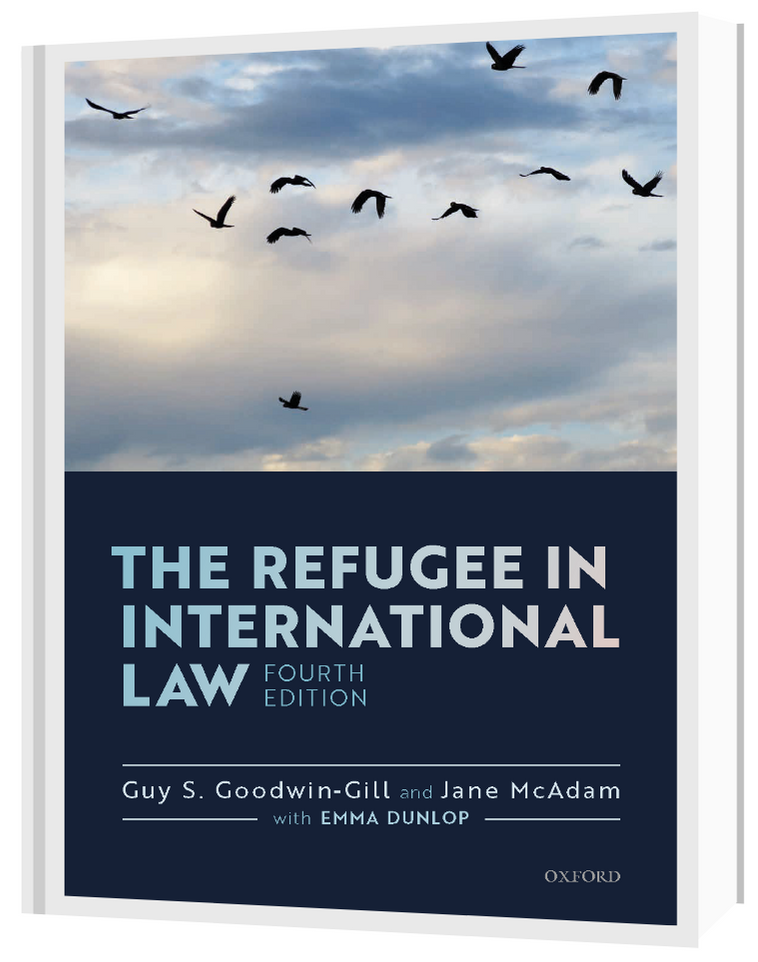 The publishers say:, ‘This expanded edition factors in the challenges posed by the movement of people across land and sea in search of refuge, and their interception, reception, and later treatment. The overall aim remains … to provide a sound basis for protection in international law, taking full account of State and community interests and recognising the need to bridge gaps in the regime which now has 100 years of law and practice behind it.’

The Refugee in International Law: Then and now

On 29 September, Guy S Goodwin-Gill and Jane McAdam reflected on the many issues confronting the global protection regime at this moment, in a conversation with Guardian Australia’s Ben Doherty, chaired by Kaldor Centre Advisory Committee member, Shukufa Tahiri.

Listen to the podcast

Kaldor Centre UNSW · 'The Refugee in International Law': Then and Now
Tweets by KaldorCentre
The Kaldor Centre plays a vital role in developing legal, sustainable and humane solutions for displaced people around the world.
Donate Join the Mailing List Contact us