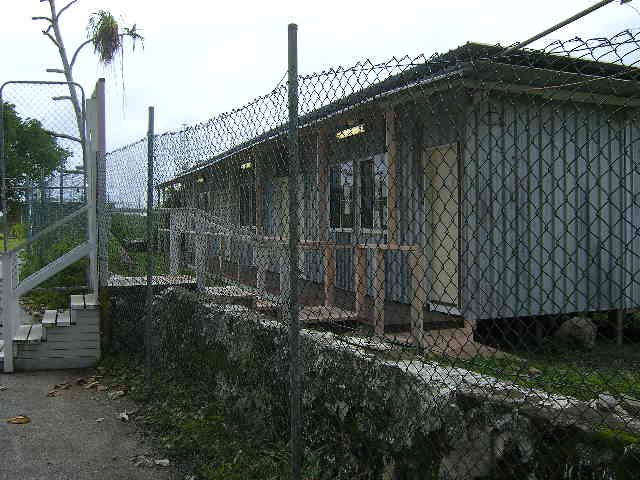 Australia’s hard-line approach  to asylum seekers arriving by boat is well known internationally – if not in the West, certainly in Pakistan, Sri Lanka, Bangladesh and eight other countries where billboards show a small boat on rough seas and tell would-be migrants in local languages, “If you come to Australia by boat without a visa, you won’t be settled there,” and “No way – you will not make Australia home.”

The country’s practices of turning back boats and processing asylum claims in offshore detention centers have been criticized as illegal by U.N. officials, including by U.N. special rapporteur on extrajudicial killings Agnes Callamard who warned last week that Australia “may intentionally put lives at risk.”

Australia has been trying to empty its two offshore centers in the Pacific since Papua New Guinea’s Supreme Court ordered the Manus Island facility closed last year. Australia said the center would close by October 31, 2017, but a deal to resettle refugees in the U.S. has moved slowly under the Trump presidency, and asylum seekers refuse to relocate elsewhere on the island, citing security concerns.

Claire Higgins, a historian and senior research associate at the Kaldor Center for International Refugee Law at the University of New South Wales, recently published a book on the origins of Australia’s refugee policy and explains how the current situation came to be.

Refugees Deeply: Australian policy and public debate is heavily focused on “boat people” when the vast majority of asylum seekers arrive in Australia by air. Can you explain this national obsession around boat arrivals?

Claire Higgins: That obsession with boats goes back to the geographical anxiety that was imbued in Australia at Federation in 1901. We have to remember this was a white nation; a settler society on the edge of Asia. One of the first pieces of legislation that was passed when Australia became a nation was the Immigration Restriction Act, which formalized mechanisms for adhering to a “white Australia.” I think that’s why boats occupy that particular place in the Australian psyche, because they represent uncontrolled, unplanned entry.

Refugees Deeply: Federation seems like a good starting point to ask you, how did Australia’s asylum policy develop to where it is today? What are the key milestones?

Higgins: When Australia signed on to the United Nations’ 1951 Refugee Convention in January 1954, we were the sixth signatory and as a result we brought the convention into force. That’s an important milestone in our immigration history.

The sustained arrival of asylum seekers by boat really began with five young men who fled Vietnam in 1976. Australia had received asylum seekers previously, but it was a very small number. By 1981, there were about 2,000 people who came by boat. They arrived at a transformative time in Australia’s history. Just a few years earlier the Australian government had formally rejected the idea of racially discriminatory immigration policy and so Australia was adjusting to becoming a more diverse populace.

At the time, the government dealt with these arrivals in two ways: by setting up a resettlement program and by managing it very carefully as a domestic political issue. They encouraged the Australian public to see that people who were getting on small boats and taking that dangerous journey were just like us. Press releases, ministers’ speeches and notes behind the scenes show a concerted effort to make sure that the arrival of asylum seekers didn’t become a political issue. It’s quite a contrast to what we see today.

Then we fast forward to the next sustained arrival of asylum seekers in the late 1980s to early 1990s and a different government handled it very differently. We had a move to mandatory detention, then things hardened over time with offshore processing and turn-backs.

Refugees Deeply: The introduction of mandatory detention seems like a huge step in the development of Australian policy.

Higgins: It was really an incremental shift. The government didn’t know what to do with those first five men from Vietnam. Within a couple of years the Australian government set up a procedure for receiving asylum seekers and determining their claims. The UNHCR was closely involved in that process; they would sit at the table with Australian officials and offer advice and guidance and monitor that process.

When mandatory detention was originally introduced it was really about getting asylum seekers away from pro bono legal assistance and community support networks. They detained them in quite remote areas of Australia. If you don’t have political leadership standing up and saying, “no, we need to handle this in a dignified and humane way,” then that kind of incremental hardening is allowed to happen.

One of the most fascinating things I found when I was researching the book is that both detention facilities and turn-backs were proposed within the Department of Immigration back in the 1970s and those ideas were rejected because they were seen, as the head of immigration said, as “a challenge to our humanity” and as hugely damaging to Australia’s reputation, while in practical terms as not providing any solution to peoples’ protection needs or the phenomenon of irregular migration.

Refugees Deeply: Now turn-backs and detention are business as usual in Australia. What changed from that initial assessment?

Higgins: In 2001, an election year, a boat of more than 400 people capsized in its attempt to get to Australia. They were rescued by a Norwegian vessel called The Tampa and in the spirit of this electioneering, the [Prime Minister John] Howard government rejected Tampa’s attempts to bring them ashore to Australian territory. The stand-off that ensued led to the establishment of a detention center on Nauru and those people were transferred to Nauru. It really was for political gain.

In more recent years we had a revival of turn-backs and offshore processing as a deterrence measure. The most important thing to remember about Manus and Nauru is that people have been placed there as a deterrent to others and to encourage those people to go home. If we look at it in that frame it explains the very credible reports about how harsh the conditions are on Manus and Nauru.

Refugees Deeply: According to government statistics, there have been no boat arrivals to Australia for the last two years. If we isolate that policy objective, have turn-backs and offshore processing worked, and at what cost?

Higgins: Obviously the government frames it as a success, but if you’re not addressing peoples’ protection needs, if you’re sending them back to danger, that’s hardly to be considered a success.

On the record there’s no indication of a boat making its way to Australia in the last couple of years, but we know that they have returned people back and we know that people have still attempted the journey. There’s a significant lack of transparency around what the government calls “on water matters.” It’s very hard for us to assess what’s been going on under this policy.

Higgins: The policy of offshore processing was poorly planned. This year alone we’ve had leaks and admissions from those involved with the policy that show there was no real plan or genuine intention to find refugees or asylum seekers a dignified future. Former Prime Minister Kevin Rudd said a few months ago that when the offshore processing policy was put in place under his government, it was only supposed to last one year. Over the last 18 months, there’s been considerable uncertainty and confusion around exactly what will happen to the men on Manus.

Refugees Deeply: It’s a long way from having UNHCR officials at the table. But what would you say to those who hold up Australia’s asylum policy as something that works?

Higgins: Australia has a very well-developed refugee resettlement program and a long record of resettling refugees. In more than 60 years, several hundred thousand people have made new lives in Australia. For new countries that are joining the UNHCR resettlement program, Australia is certainly a model to look to in that sense.

But on asylum policy, what the international community could learn is that the hard-line, unilateral approach that Australia has been taking is one that doesn’t fulfill Australia’s international obligations and it’s doesn’t work. It’s a dead end.