Setting the Agenda, Interview with Jane McAdam
Share This Story Save this webpage as PDF 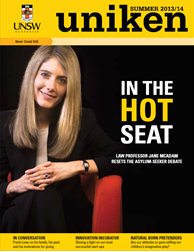 Every time she writes a newspaper opinion piece or gives a radio interview, Scientia Professor Jane McAdam’s email inbox surges. Some of the messages convey threatening and unsubstantiated accusations that she is “destroying Australia”, but more often they express appreciative requests for more information.

Her latest role as founding director of the new Andrew & Renata Kaldor Centre for International Refugee Law at UNSW is about to satisfy that hunger for information and informed debate.

McAdam’s ambition is to create the foremost independent academic research centre – the “go-to place” – on legal issues relating to refugees and other forced migrants. The centre will bring a principled, human rights–based approach to the subject and provide an important bridge between scholarship and practice. It will enable high-quality research to inform public policy debate and legislative reform as an independent space that connects academics with the legal profession, policy makers and the public.

“The time is right because Australia is in a very dark place when it comes to asylum law and policy,” McAdam laments. “We’ve seen an erosion of respect for the international obligations that we have voluntarily committed to and we’ve seen a lot of political slogans driving policy. These have both fostered and drawn upon fear that already exists within the community that’s very often based on false premises.”

It’s precisely this point that spurred Andrew and Renata Kaldor – leaders in the world of education and arts philanthropy – to help fund the establishment of the centre. They want to restart the conversation about Australia as a country of
tolerance and respect. Incensed by the lack of informed debate, they are eager to encourage more rigorous national discussion informed by facts, but absent of politics.

Their interest in the subject is founded on personal experience. Andrew was born in Budapest, in the early days of the Hungarian Communist regime.

His parents escaped in 1947 with the help of so-called people smugglers and forged documents. The family sought refuge in a camp in Austria. Australia was the first country to accept them.

His wife, Renata, was born in Prague. She fled the Czechoslovakian Communist regime with her family, using methods that would have been frowned upon today. “Yes we are refugees,” Renata admits, “and yes there is a special interest for us, but there is an enormous number of Australians who don’t have the backgrounds we have and who are just as engaged, frustrated and concerned about the way things have turned in this country. We are trying to show that humanity is not lost here and everybody has the goodwill to come up with a solution to progress this, but in an international context as well.”

Memories of the Tampa and “children overboard” affair in 2001 remain vivid. “You go back in history to things that really make you aware of your own complacency and I suppose that became a very emotional issue for us,” says Renata. “I don’t think we were any different from many Australians who didn’t have our background, but obviously we were very sensitive and very conscious that we could have been on that boat; our children could have been on that boat.”

McAdam intends that, among other things, the centre will recognise the beneficial contributions made by refugees like the Kaldors. She cites a 2011 report that acknowledged refugees as being “some of Australia’s most productive and
successful people” with five out of eight billionaires (in 2000) coming from refugee backgrounds.

McAdam believes having an advisory committee that is non-partisan is essential. “It’s my job to keep all governments accountable to their international legal obligations regardless of their political colours,” she says. “None of the major parties has had a good track record on this issue in recent times.”

Advisory committee members are from across the political spectrum, including refugee advocate and barrister Julian Burnside and former NSW Liberal Premier Nick Greiner, whose family fled communist Hungary as refugees in the 1950s.

“Our primary purpose is not to play in the daily [political] game,” Greiner recently told the ABC.

“People like the Kaldors, like myself, are of refugee background and we are … concerned about the human rights aspects of the whole debate and hopefully [we can] have a debate that’s a little more rationally and scientifically based
than what has been essentially an emotional, political debate.”

Raised on Sydney’s lower north shore, McAdam credits her parents with instilling in her a strong sense of social justice. “I was always being told how fortunate I was,” she recalls. She was educated at Wenona, a non-denominational
private girls’ school, under the motto “That I may serve”. “At Wenona, there was this idea of service learning, and that had an impact,” McAdam says. She has since served on the school’s board.

While her upbringing was a world apart from the experiences of most refugees, McAdam remembers being aware of the issue from an early age. There was the admiration for the Vietnamese orphans who became friends after their adoption by local families; and she points to a tremendous example of generosity from her great aunt, who helped facilitate a visit by the Czech Philharmonic Orchestra to Australia in the 1950s and then secretly gave financial support to a family of Czechoslovakian musicians who were living under Communist rule. The friendship between the families endures to this day.

When it came to choosing a career, it was the equation between law and justice that first motivated McAdam to study law at Sydney University in the 1990s (where she attained first-class honours).

“In much of my law degree, though, the justice element was missing,” McAdam recollects. “I didn’t find it terribly inspiring and contemplated giving it away because I found it very dry, very technical. The study of human rights law and
migration law changed all that and sparked my interest again.” International refugee law is, she says, “an intellectually stimulating and challenging area of the law, made even more so because of the political context”.

Working as the associate to a Federal Court judge in 2000 sealed the deal. Many of the cases involved self-represented asylum seekers, and one in particular became the impetus for McAdam’s doctorate at Oxford University. “An Indonesian man was before the court.‘They say I’m not a refugee, but look I’ve got bullet wounds,’ he told the judge, lifting up his shirt to show the scars. He was crying as he said: ‘If you send me back they will kill me.’
I thought ‘well even if that man is not a refugee under the technical legal definition, if he is at risk of being killed upon return, surely there must be a law that stops that from happening?’”

McAdam would later become instrumental in securing amendments to the Migration Act, based on Australia’s international human rights obligations, that now ensure refugees get protection in Australia if facing torture, the
death penalty, or cruel, inhuman or degrading treatment or punishment back home.

This year, McAdam was made a Young Global Leader of the World Economic Forum, an honour bestowed annually on 200 exceptional leaders under 40 from all over the world. She is a research associate at the Oxford University Refugee Studies Centre and one of only a handful of Australians – including Julia Gillard – to be appointed as a non-resident Senior Fellow at the Brookings Institution in Washington DC (ranked as the world’s top think-tank).

Her impressive record has not gone unnoticed by Law Faculty Dean, Professor David Dixon, who is delighted to have the centre under her stewardship. “Jane expresses so well UNSW Law’s approach and priorities,” Dixon says.

“She feels very strongly about refugees, but knows that neither a general desire to ‘help people’ nor engaging in party-political bickering is adequate. Instead, she uses rigorous and sharply focused legal skills, which express her
commitment to justice and the rule of law, to challenge preconceptions and to shift the policy debate.”

The Kaldors agree, saying there is no better candidate and no better home for the centre. “We’ve found this treasure who is very articulate, very passionate, who can really make a huge difference,” says Renata. “We were absolutely
convinced that she was the right person to bring this forward and that UNSW Law, with its emphasis on social justice, was the right home.”

The stellar career of McAdam – one of the youngest professors appointed at UNSW – has been fortified by her partnership with Ben Saul, Professor of International Law at Sydney University. “We have had very similar careers and it’s hard to know who has influenced whom in what ways,” McAdam admits. Both completed doctorates at Oxford with the same supervisor, returning to take up academic positions at different Australian universities.

“We try not to compete for things directly,” she says. “Fortunately, when we have done so, we have both been successful, such as with the Australian Research Council Future Fellowships that we were awarded in 2011.” She smiles. “It’s amazing to have someone close who understands exactly what you’re doing.” Occasionally they collaborate on overseas research, bringing different perspectives to the issues.

It’s clear that McAdam’s work is much more than a job: it’s a calling. The dynamism she brings to the role will be needed in the years ahead, and not least, to tackle the emails now arriving from every corner of the globe.

Uniken is UNSW’s flagship magazine. Published quarterly, it reports on issues affecting the tertiary education sector and the latest developments in UNSW’s research and teaching. It also features comment from leading academics on issues of public concern.