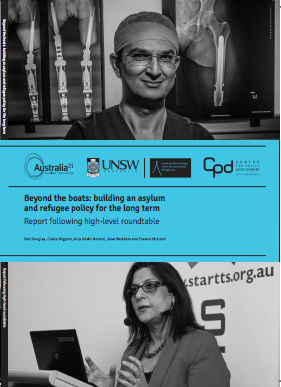 The Andrew & Renata Kaldor Centre for International Refugee Law, in partnership with Australia21, the Centre for Policy Development (CPD), launched the report Beyond the Boats: Building an Asylum and Refugee Policy for the Long Term.  The report was launched by the Hon Fred Chaney AO, Senior Australian of the Year and hosted by Russell Broadbent MP in Parliament House Canberra on Wednesday 5 November 2014.

The report results from a high-level expert roundtable on asylum and refugee policy held at Parliament House in July.

Now that the acute phase of boat arrivals appears over, Beyond the boats urges all parties to use this opportunity to construct an overarching national asylum and refugee policy for the long term.

The nine-point framework presented focuses on managing arrivals, conditions and treatment, and regional and community engagement. To make an immediate and appreciable difference the report recommends expanding pathways for humanitarian settlement, such as via orderly departure arrangements, swift determination of claims and improved conditions including work rights and transitioning away from mandatory detention. In addition, a regional Track II dialogue on forced migration is proposed to help officials to look beyond electoral cycles.

The recommendations recognise the broad framework of existing refugee policy commands cross party support, but seeks to build on this to provide a more constructive and humane way forward that is consistent with Australian values.

Read the report and see the media release.

The report was discussed on ABC NEWS AM with Chris Uhlmann and 'Now we've stopped the boats, what next?', Sydney Morning Herald, 5 November 2014.