Lost in transit: Refugees stranded in a legal vacuum in Indonesia
Share This Story Save this webpage as PDF 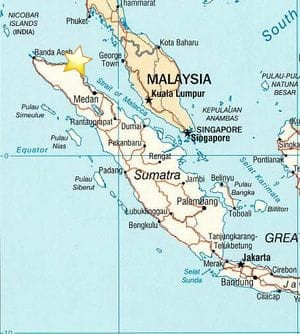 On the morning of 24 June 2020, three Indonesian fishermen rescued 94 Rohingya refugees from a sinking cargo ship. They attempted to transport the group – 49 women, 15 men, and 30 children – to Kuala Tanah Jambo Aye in Seunuddon district, North Aceh, but their engine broke, leaving them stranded four miles from the coast of Seunuddon. Eventually, they were taken to  a temporary shelter in Lhokseumawe. They were said to be in a weak condition, and the authorities provided them with food.

This was a unique situation: that ordinary people in Aceh would help boat people to land, and that the state apparatus would allow them to do so. For a start, Indonesia is not a State party to the Refugee Convention. It has no national laws governing refugee issues, apart from a technical, administrative regulation (Presidential Regulation (Perpres) No. 125/2016 concerning the Handling of Foreign Refugees), and there is no specific mechanism to handle asylum claims. As well, Indonesia is greatly affected by the COVID-19 pandemic.

Since the early 2000s, there has been an influx of refugees to Indonesia, with arrivals from Afghanistan, Iran, Iraq, Sudan, Somalia, Sri Lanka, Bangladesh and Myanmar (Rohingya). At the beginning of 2019, there were around 14,000 refugees and asylum seekers in Indonesia (29 per cent of them children) who had arrived in different ways. Some used boats from Bangladesh or Myanmar, such as Rohingya refugees. Some used planes from Central Asia or Africa, travelling on tourist visas. Others came from Malaysia by sea, whether legally or illegally. Some were driven out by persecution in their own country. Others were victims of human smuggling. Some hoped to move on to other countries through UNHCR-referred resettlement; Indonesia was just a transit point.

But the absence of strong regulation has meant they are effectively stranded in Indonesia. There is no clear way to leave. Returning to the country of origin is impossible; third-country resettlement is remote; and surviving in Indonesia is very difficult.

Since March 2018, many refugees have been stuck in Jakarta. This was largely a result of Australia ceasing to provide funding for the International Organization for Migration (IOM) to assist new arrivals (although those who arrived before 15 March 2018 continue to receive IOM support). Moreover, since 19 August 2019, the DKI Jakarta Provincial Government (Pemprov) stopped providing food aid to refugees and asylum seekers on the land of the former West Jakarta Kalideres Kodim (Headquarters of the Local Army District), and handed over responsibility to UNHCR. But UNHCR has no means to establish refugee camps or shelters for refugees or asylum seekers.

There are also social and cultural challenges. There are still many Indonesians, including in big cities like Jakarta, who do not understand that refugees and asylum seekers are different from economic migrants. They are not aware of the kinds of situations they have fled. Locals often strongly reject the presence of refugees and asylum seekers in their area, and are jealous that they receive monthly living rations from international agencies – especially since locals are sometimes very poor themselves.

Who should be responsible for dealing with refugees and asylum seekers displaced in Jakarta and other parts of Indonesia? Refugees cannot be repatriated when they face a real risk of persecution, torture or other serious harms at home. The principle of non-refoulement is part of customary international law and binds all countries, regardless of whether they are parties to the Refugee Convention or its 1967 Protocol.

As noted above, Indonesia is not yet a party to those treaties, and does not have a legal framework or system for determining refugee status. Even so, it has a long tradition of accepting refugees and others who need international protection. For instance, between 1979 and 1996, Indonesia used Galang Island and Rempang Island as temporary shelters for Vietnamese and Cambodian refugees.

The terms ‘refugees’ and ‘asylum seekers’ are not used in Indonesian immigration law (although ‘refugees’ are now defined in the 2016 Presidential Regulation), and they are often confused with other transitory migrants or ‘economic’ migrants who do not have proper travel documents or overstay. In 2010, the Director-General of Immigration issued Regulation No. IMI-1489.UM.08.05 of 2010 (Indonesian version available here) concerning the Handling of Illegal Immigrants, which provides:

(1)Upon being detected as being within Indonesian territory, an irregular migrant shall be subject to immigration action.

(2)In the event the irregular migrant as referred to in paragraph (1) declares its intention to seek asylum and/or due to certain reasons cannot be subjected to deportation, such situation shall be coordinated with the international organization in charge of matters of refugees and/or UNHCR to determine their status.

(1)An irregular migrant’s status within the country shall not be in question provided that such person:

a.has obtained an Attestation Letter of Asylum Seeker from the UNHCR; or

b.has been granted refugee status by the UNHCR.

(2)An irregular migrant as referred to in paragraph (1) may be placed at a certain location with the facilitation of an international organization in charge of matters of refugees or UNHCR and must be reported by UNHCR to the Directorate General of Immigration.

(3)The irregular migrant as referred to in paragraph (2):

a.must comply with the prevailing laws and regulations and complete a form in the format as attached to this Regulation of the Director General; and

b.is subject to monitoring with regard to his/her placement], which shall be the responsibility of the Head of the local Immigration Office.

Subsequently, in 2016, the Director-General of Immigration issued Regulation No. IMI-0352.GR.02.07 of 2016 on the Handling of Illegal Migrant Claiming to be Asylum-Seeker or Refugee (Indonesian version available here).

The 2016 Presidential Regulation, mentioned above, now helps to fill the legal vacuum left by the two Regulations mentioned above when it comes to refugees and asylum seekers in Indonesia. The Presidential Regulation provides partial legal certainty about the process for handling asylum seekers and refugees in Indonesia, including a temporary shelter mechanism and the responsibilities of various actors. Immigration detention centres must coordinate with the local district/city government to ensure that refugees are taken to an appropriate shelter (article 24). If ‘shelter’ in somewhere like a community house or former government building is not yet available, refugees may be placed in temporary accommodation, as determined by the regent/mayor.

Furthermore, article 26 stipulates that it is for the relevant regency or municipal government to determine the shelter for refugees, and that it must be:

a. In close proximity to a healthcare facility and religious facility;

b. Situated within the same regency/city as one of the 13 Immigration Detention Centers in Indonesia operated by the Directorate General of Immigration; and

An international organization may facilitate the provision of basic necessities for refugees placed in the shelter, including clean water, food, clothing, healthcare and religious facilities (article 26(3)-(5)).

Indonesia does not yet have a comprehensive legal framework for handling asylum seekers and refugees. While Presidential Regulation No. 125 of 2016 has provided some clarity about their treatment, it is not enough to provide legal certainty or legal force. There is no national body that is solely responsible for dealing with refugees, and in this legal vacuum, local governments have found it challenging to deal with asylum seekers and refugees stranded in their area. International agencies, such as UNHCR and IOM, also have limited mandates and budgets. Indonesia needs strong policies and mechanisms to protect asylum seekers and refugees, especially since more will surely arrive in the future.

Heru Susetyo is an Associate Professor at the Faculty of Law, Universitas Indonesia, in Jakarta, Indonesia. He is also on the Executive Board of Victim Support Asia, Secretary-General of the Association of Lecturers of Victimology in Indonesia (APVI), Founder of the Indonesian Victimology Society, Member of the Jakarta Province Research Council (2018 – 2022) and formerly on the executive committee of the World Society of Victimology (2009 – 2015). He is currently teaching human rights, victimology, law and social welfare, child protection law, Law and Society, and Legal Research Methods. Dr Susetyo is also an Investigator under ARC DP180100685 on ‘Indonesia’s refugee policies: responsibility, security, and regionalism’ and hosted a workshop on Presidential Regulation No. 125 of 2016 in March 2019 at Universitas Indonesia.