What is ‘refugee status determination’?

Refugee status determination (RSD) in Australia is the process by which a person (asylum seeker) may be recognised by the government as a refugee. Asylum seekers have the opportunity to put forward the reasons why they fear that they will be persecuted or subjected to other significant harm if they are returned to their country.

Strictly speaking, RSD does not ‘make’ someone a refugee but simply recognises or ‘declares’ that the person is a refugee. This is because under international law, a person is a refugee as soon as they meet the definition set out in the Refugee Convention. This may be the time when they leave their country or after their arrival in Australia (‘sur place’). In reality, a person needs to be officially recognized as a refugee in order to receive the rights and entitlements that attach to refugee status.

The Refugee Convention does not set out procedures that must be followed in an RSD system, but there are many non-binding international standards. For Australia to comply with its obligations under the Refugee Convention, it must have a procedure in place that enables the government to identify accurately the people to whom it owes protection.

The RSD process is also used to determine whether a person is entitled to complementary protection, based on serious human rights violations under the International Covenant on Civil and Political Rights and the Convention against Torture (see our factsheet on Complementary Protection).  All applications made for protection in Australia are considered against Australia’s domestic legislation on refugee status and complementary protection, concurrently.

RSD in Australia—how it applies 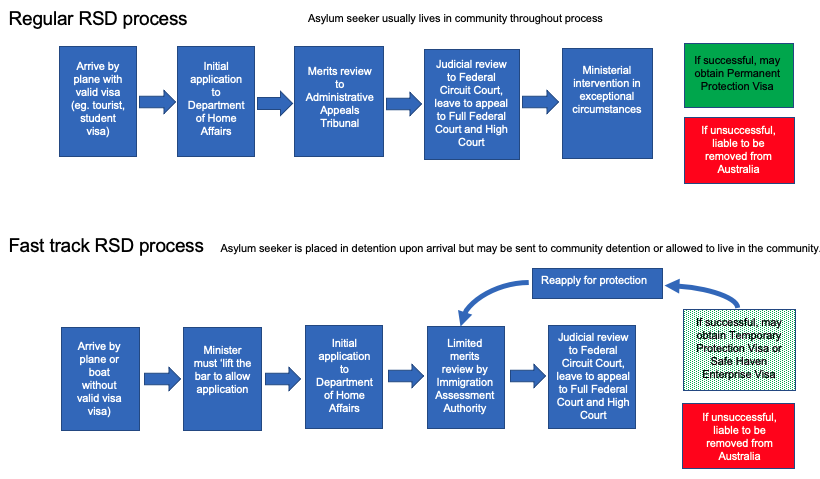 The key steps in the ‘regular’ RSD process in Australia, as set out in the flowchart above, are:

If an asylum seeker is found to be owed protection at the primary or merits review stage, they will (subject to identity and security checks) be granted a protection visa (visa subclass 866), meaning they will be recognised as a refugee by Australia and will receive permanent protection.

The key steps in the ‘fast track’ RSD process, as set out in the flowchart above, are:

If an asylum seeker is found to be owed protection at the primary or IAA review stage, he or she will (subject to identity and security checks) be granted a Temporary Protection Visa (TPV) or a Safe Haven Enterprise Visa (SHEV). After expiry of their temporary visa (either a TPV or SHEV), they must reapply for protection (or another visa, if eligible). Learn more about in our factsheet on TPVs and SHEVs.

For a more detailed analysis of the ‘fast track’ RSD process (including significant legal developments since the process was first introduced) see our research brief on ‘fast track’ refugee status determination.